AADE began in 1958 as the Sydney King Dancers (see Black Dance from 1619 to today). In the tradition of Pearl Primus and Katherine Dunham, AADE struggled to carry the torch of traditional African dance in America into its second generation. Working evenings and weekends from its headquarters in the narrow apartment Arthur Hall shared with his mother Ms. Sallie Hall on Sydenham Street near Susquehanna, the company came to a turning point, as reported at the time by Daniel Webster in the Philadelphia Inquirer (1968) -

... The walls are decorated with striking masks and shields. Long drums stand in the hall, and the sound of the sewing machine in the kitchen sets a rhythmic base for the activity there. Hall, and members of his company who happen to have free time, make the apartment the headquarters for their hopes, for the company has had little commercial success.

The performance at the [Nigerian] embassy marked a high point in the company's climb from obscurity. It has taken ten years for the group to attain some national recognition, and even now the company members do not make their living or anything near it from dancing.

Hall ticked off his troupe: "Vangie Brown works in a pickle factory ~ worked, that is; she was laid off because of the time she spent on the dance. Karen Steptoe [Warrington] is a housewife with two kids, and Carol Butcher is a recreation center worker. Frank Hill is a computer operator for a bank, and Ione Nash works for the Veterans Administration. Willie McCray works in a factory. This is the way we live."

The idea of African dance seized Hall in the course of training for a dancer's career. When he came here in 1951 from Washington he saw a recital at the Judimar School and decided that dance, some kind of ethnic dance, was what he wanted.

"I had danced a little in school, even won some contests," he recalled in a soft voice, "but I didn't know any technique. I joined the school and later went on to the Katherine Dunham School in New York. At that time I wanted to do Indian dancing, but I realize now that I was searching for something I could dedicate myself to."

[ Arthur Hall spent two years in the Army, performing and doing choreography for a special services troupe which toured the bases of Germany and the occassional German beer hall, most notably in Heidelberg. Before the Army, in 1953,] Hall ... ran into a young graduate student from Ghana Saka Acquaye, who knew the music and lore of his own country, as well as some of the neighboring states, and began to show Hall how the people of Ghana danced, moved and thought.

"I studied with him three years, and during this time I decided to dedicate myself to keeping this lore in America. After all, there are 20 million black people here, and I think we must know something of our culture. Our people are not aware of their culture and heritage. I saw in the dances a chance to bring grandeur back into blackness," he said. 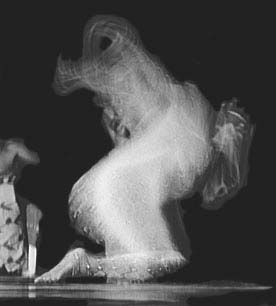 Starting a dance company, developing a repertory, designing and making costumes, finding dancers and musicians and keeping them together is a job so staggering that ballet companies have tried it only with enormous financial reserves and corps of experts.

Hall had to do it alone, with almost no funds and without much prospect for success. But Hall carried to his project not only a strong desire to perform, but an evangelist's dedication to the value of his own work.

Looking back on those discouraging first months, Hall concedes that his ideas were ahead of their time. "It was too soon," he said, "but ideas about Africa began to change, and as they changed, we found chances to dance.

"Of course, our problems were that we had no place to rehearse. We lacked the facilities for training dancers and musicians, and while we found many who wanted to join us, they often lacked training, some couldn't afford formal lessons in schools."

There remained a problem of orientation, too. "Our people are looking in history books, but we don't see us. We want to associate with ballet companies, but we can't. We've mutated. We always had the problem of what to dance and asked the question, 'Where can we go?'"

Having started at the bottom, the only answer seemed to be "up." Hall became the teacher of regular classes, and the city Recreation Department offered the center at 44th and Haverford Avenue as a rehearsal hall. The company works there two nights a week and sometimes at the [Church of the Advocate, Father Paul Washington, rector].

Opportunities came. The troupe was engaged for the Theatre of the Living Arts production of Beclch, a play that still rouses an argument when mentioned. And the city's Festival of the Arts last spring provided a showcase for outdoor performances at the Museum of Art.

Now, as the city's schools seek a curriculum that meets the needs of the Negro population, Hall's dancers are being used in school assembly programs. The schools are exploring wider use of the troupe in a program of African culture to illustrate traditions in music and dance.

And the performance at the Nigerian embassy has had its results, too. Some interest has been expressed from Washington, enough to encourage these Philadelphians on their way to becoming ambassadors of African culture.

from the same article ~

... For the officials of African republics gathered that night ... the vividly dressed dancers whirling and leaping in the ballroom brought a message from home. The long drums throbbed and rattled, the pipes shrilled and moaned as the dancers recreated the lore of the hunt, the conventions of courtship, the legends of gods and creation ... the dance expressed something deep about the culture, something special about the people who produced the dances ... Philadelphians, for this company is made up of Americans who work and train in Philadelphia under the direction of Arthur Hall. None of the dancers, including Hall, has been closer to Africa than the Jersey shore ...

The above article by Daniel Webster was written at a time of high transition for the AADE, but then 1968 was a year of high transition generally. The company appeared in Max Roach's Freedom Now Suite the day Martin Luther King, Jr. was assassinated. The show was almost canceled in shock and mourning, but it went on with the idea of 'Now more than ever.'

The company performed with Count Basie & his orchestra, and it closed the season at Jacob's Pillow. It received national television exposure. The next year the company moved into the Ile Ife Center on Germantown Avenue. With Arthur Hall as director of Philadelphia's Model Cities Cultural Arts Program, the AADE became the elite company of a thriving cultural center and school. It increased its range of touring, began piling credit on credit, and began dealing with the problems that come with success, particularly the problems that came with the astounding success of an inner city cultural arts center which sprang from a Model Cities program designed by Congress to preclude success.

Women of the Ensemble backstage at the Philadelphia Museum of Art, 1982
Monzella Allen, Connie Carter, Nana Yaa Anima (Elenor Spicer),
Ajida Oxios (Sandra Charleton), Evangeline Brown
B.Wms. photograph For a condensed version of the history of the AADE, see Chronological Outline
For more detail, explore the Collection Directory
See also the directory of AADE Alumnae
If you have any information to add or errors to correct: jw157@columbia.edu
or use Response Form