Thus begins the sacred dance Yanvallu, as taught by Arthur Hall, who learned from Lavinia Williams, who taught for Katherine Dunham, who learned the dance first documented in the New World in the year 1619, when it was already an ancient dance carried across the Atlantic from the Slave Coast of West Africa.

The Fantastic, The Authentic, The Truth Set to Music and Dance

So reads the Club 3 Guys poster for Max Roachs Freedom Now Suite at Town Hall, the corner of Broad and Race, April 4th, 1968, when word comes of the killing of Reverend King in Memphis. Backstage, in shock, Max Roach, Abbey Lincoln, and Arthur Hall consider stopping the show, but they go on, in a year of tumult and assassinations, keeping at least some of the raging fire on the stage and off the street.

Nineteen sixty-eight was a watershed year for the Afro-American Dance Ensemble. They performed for the African Press Attaches in DC, with Count Basie, in high schools, colleges, clubs, and ballrooms across the Mid-Atlantic states, for Action Summer 68 in Philadelphias parks and playgrounds, on television, and at Jacobs Pillow in the Berkshires, one of the most prestigious modern dance stages in the country. The following year, through the Model Cities program, they opened the Ile Ife Black Humanitarian Center, where after-school programs in dance, music, and art began a long history of keeping thousands of children off the streets of North Philadelphia.

And the Children Danced : Thirty Years of the Arthur Hall Afro-American Dance Ensemble is the story of the birth of the Black Arts Movement in Philadelphia. Robert Farris Thompson of Yale describes how "The Africanist center in America shifted from Katherine Dunhams school in New York to Ile Ife in Philadelphia." Dance historian Joe Nash says, "The Arthur Hall dance company was not like the other dance companies ... You could see the difference every year they came to Dance Africa. Youve got to be unique!"

And unique they are. In their own voices, Arthur Hall, members of his company, and the children who grew up in the Ile Ife Center describe how they carried traditional African and modern dance to stages and schools across the country and across the seas, bringing a larger vision of beauty and dignity to students and audiences of all races and places of origin. It is a unique story, and it is a beautiful story, spanning four decades, from the 1950s through the 1980s.

And the Children Danced is a story of inspiration and triumph. of institution building and culture-making, of movement education and spiritual healing. From the beginning, the story revolves around the vision of Arthur Hall. "I think we must know something of our culture. I saw in the dances a chance to bring grandeur back into blackness," he said 1968 (Philadelphia Inquirer Magazine). Now, nearly thirty years later, the vision of Arthur Hall is essentially the same, and his voice is at the center of And the Children Danced. Remembering the dearth of information about African culture when he began, he says:

When you said "African," you said "Tarzan." When you came with the other information -- that Tarzan was a lie, that there was beauty to our culture and our heritage, people said, "Are you losing your mind? Not a plug nickel are you going to get doing something like this." So, I was asking, where is it for me? I dont see anything. Theres not a picture, theres not a quote, theres not anything that talked about the golden ages of our culture. And I wanted to find out, where was it? Where were the African kings and queens? 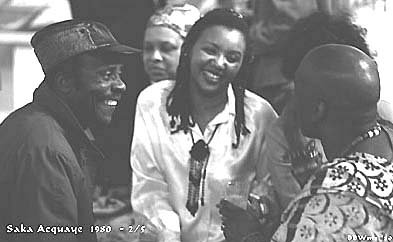 And the Children Danced is a one hour television special that shows the dances, sings the songs, plays the rhythms, and tells about the ancestors:

I got to Philadelphia at age seventeen and ran into John Hines and Saka Acquaye. Those two people -- John Hines had been teaching Afro-Cuban, although then we called it "interpretive dance." Saka Acquaye is one of the great artists of Ghana. He was a genius -- he is a genius. He came with a mission. He came to bring this cultural richness to us. We started learning history. Not only did he come with the dances, he talked to us about our people and our plight, of being separated from Africa. He taught dances that Im still teaching, and the movement, and the story behind the movement, and the costumes that went with the dances -- well, Id died and gone to heaven. This is not just dance. This is history. This is culture. This is everything that Id ever wanted to know. It was just like medicine, because then I knew. This is what I wanted to do. *

And
the
Children
Danced
is the story of the Dance Ensemble, the Ile Ife Center, the Ile Ife Museum, and in Maine, the People to People Dance Co., all reflecting African influences in an exemplary way and reflecting the work of an artist and a healer raising spirits in North Philadelphia and eventually in communities across the US and on four other continents, including Africa herself.


In the voice of Arthur Hall ~


During the summer, when the community heard the drums, it was just unreal. You couldnt drive them away. They were all up the fire escape. They were all up on the roof , because nobody had heard any sounds like that. And then by the time we started adding the chants to it, it was church. It was just amazing, to sit there and hear that and see it on Broad Street in North Philadelphia. It never happened before in the whole history of North Philadelphia. So we made that impact through the drumming, and by the time the dancers got there, and we started rehearsing, the people would come to see it as it developed. They would sit there and watch, and it was a great classroom ... *

And the Children Danced presents a vision which is just as important now as it was when it was being developed. Again, the voice of Arthur Hall: 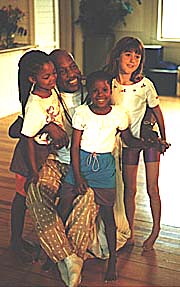 I had always hoped that I would be able to make the world a little better, to be able to pass information on that was very important. I came from a broken home. Im coming through racial prejudice. Im coming through poverty. Im coming through all these things, and this is part of me. And so how can you make it better? Because one of the things that you could easily become is angry, and I did not want to get involved with going out bombing and hating ... and so I was hoping that through what I was doing with dance -- it would make people think a little bit more ...

After one of our concerts, this man was just waiting ... Finally, when we got everything packed up, he said, "Excuse me ... I just want to tell you something. I wouldnt have given a plug nickel for African dance, but to come into this auditorium and to sit and read the program and then look up on the stage and see that you were actually interpreting something important to life has changed me totally ..." And then he left. This is what I was hoping. That every time we performed, we would touch some-body like that. So, it was a mission. I take dance as my ministry. I dont know how to do anything else. I wanted to be a minister when I was a little boy, so now I work on it this way. Every time I make somebody feel good, every time somebody smiles, then I know Im succeeding in my mission. *

And the Children Danced uses historical film of the major dances, still photographs, and interviews to tell the story of a beautiful and unique people. Original music for the production is by two collaborating musicians, both of whom are a significant part of the history being recounted -- Odean Pope was the music director of both the Model Cities Cultural Arts Program and the original production of Arthur Halls Orpheus (1973), and John Blake composed and performed the score for Arthur Halls A City Called Heaven (1975). Filmmaker Bruce Williams has been working with Arthur Hall since 1977, producing Snake Dance Teacher Dance (1978), Orisun Omi (The Well) (1982), and most recently Arthur Halls Obatala (1996). The sophistication and artistry of Arthur Hall himself have been recognized since the beginning:

The first big concert - we had staging, we had light designers, we had all that stuff going on, and with that, the reputation was built. We had a two page review. Nobody ever had a two page review. They had pictures. When the people came to see the concert, they were just flabbergasted from the time the curtain opened, because sets and lights for African dance and all that -- are you kidding? In fact, the stage curtain caught fire, and they thought it was smoke. We were hot. We were hot. And the audience never realized it was a fire, they thought it was smoke. *

And the Children Danced looks back to the early years of Saka Acquaye and the West African Cultural Society, and it looks forward to the thriving legacy of dignity and pride carried by the children of Ile Ife:

Ile Ife got started in 1968. We were riding the crest of the wave [of] the Model Cities program ... We were very successful. We toured. We were basically the image -- the beauty of blackness, black beauty. We were something major as a performing arts education group. We went to prisons, we went to hospitals, we went to senior citizens homes carrying this energy, this message. We were successful by any number of standards, but it fell apart at the center itself ... and it was a sad day. But thank God we were still able to continue on as long as we did, and then it just -- but for years we carried on. We did the Afro-American Dance Ensemble. Its its own success story and growth, and where they are now -- its still not over, because its still in peoples souls. *

And the Children Danced is guided throughout by the spirit of Obatala, the spirit central to the Yoruba creation myth, to birth and creativity, and the spirit that has been given exquisite form by Arthur Hall and the Afro-American Dance Ensemble. The spirit of Obatala has been called for centuries by many praise names -- the Divine Sculptor, the patron saint of children, Alamo Re Re, the one who turns blood into children, Alabalashe, the wielder of the scepter of life, and O Ho Ho, the father of laughter, who sits in the sky like a swarm of bees. 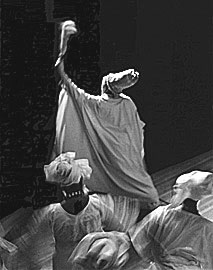 The dance of Obatala is perhaps one of Arthur Halls most sublime creations. "Many of his company's dances have cultural truths and verity, but this one has much more," writes Daniel Webster (Philadelphia Inquirer, 10/21/70). "Its chief asset is the long solo dance that Hall himself performs. He is an old king, shrouded and shielded [to protect the audience from the power of his gaze], who takes a few bent steps after the young worshipers [have consecrated the stage]. From those few steps develop a widening circle of variations, always harkening back to the beginning but extending the idea with great imagination ... this is a memorable creation and a notable dance achievement. Even in the most fervent moments of the dance, there is the dignity of age and the beauty of recollection."

And the Children Danced reflects a universal spiritual imagery given form by this history specific to North Philadelphia. It reflects the art and the mission of Arthur Hall, engaging the heart and the mind and delighting the eye and ear. It aspires to be inspirational to young people, and for those of us who are older, to be full of "the dignity of age and the beauty of recollection."

*footnote: all block quotes are from the 14 Dec 1996 interview of Arthur Hall
by research assistant Ayo Ngozi-Brown.

And the Children Danced